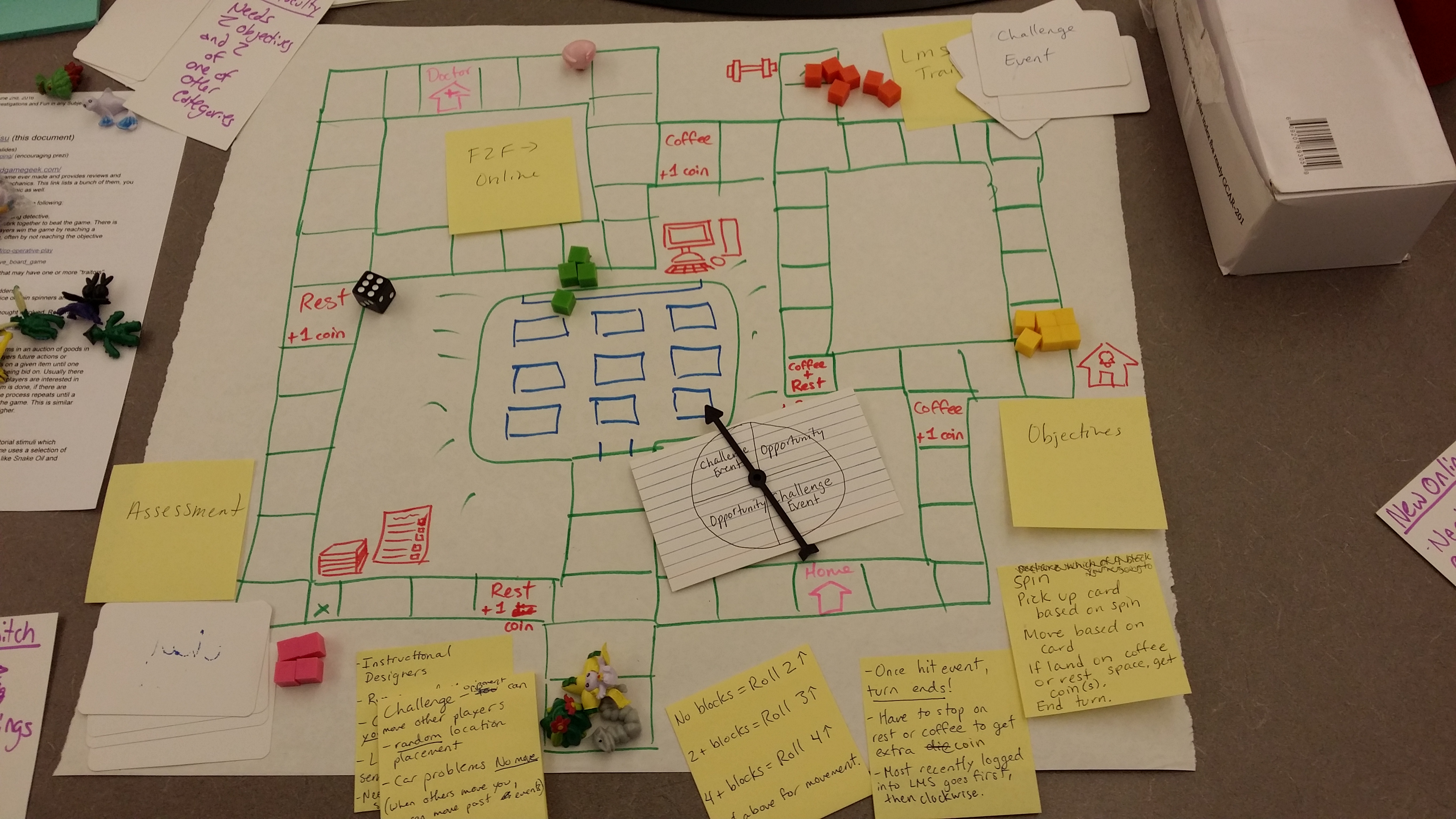 I attended a session at the Emerging Learning Design Conference titled “Paper Prototyping Games for Engaged Investigations and Fun in any Subject.”  The presenters, Teresa Slobuski and James Morgan, from San José State University, point out that building board games can get students talking about a particular subject in a creative and fun way.

The session began with Teresa and James creating a very simple “race to the finish” game.  They drew a random board on a sheet of paper and selected tokens.  Then they started rolling dice to advance their tokens.  They played the game once through, and realized it was boring.  To spice things up, they added special mystery spaces to the board that would either move your token forward or backward.  Iteration by iteration, they added more elements to the game.  When something did not feel right, they adjusted the rules.

This iterative process can be used to build games on any topic.  In my team, two thirds of the group were instructional designers, so we built a game where players were “instructors” who had to design a course before the semester started.  There were four areas of the board that every player had to collect items from: Assessment, Objectives, Training on the Learning Management System, and Converting a course from a face-to-face into an online format.  After collecting one item from each area, the player headed to the “classroom” in the middle of the board, which ended the game.

Initially, players moved around the board using “Challenge” and “Opportunity” cards with either negative or positive numbers, a spinner determining which of the two cards would be picked up.  But after I had a long streak of “Challenge” cards and made no progress in the game, we decided to modify the rules.  The cards became events instead of spaces – an event like “Go to the doctor.” would require the player to move to the “Doctor” space on the board.  After picking up the card and following its instructions, players would roll a die to determine the number of spaces to move.

After much playtesting, we added some additional mechanics:

I had a lot of fun designing this game, and all it required was some stationary, writing utensils, and gaming paraphernalia (dice, tokens, cards).  While we designed our game around course design, a paper prototype can be built for any subject – another group designed their game around The Odyssey, for instance.  Whether you decide to build a board game yourself, build one together with students, or have students create board games on their own, one thing is clear: if they are anything like me, students will have fun both building and playing the game, and they will take pride in their finished product.