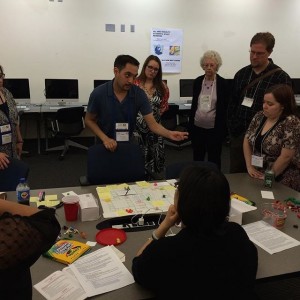 My first taste of educational technology came after I graduated from Boston University with my pristine Bachelor’s degrees in Computer Science and Psychology, ready to take on the world.  Why those two degrees?  I’m a techie that likes working with people.  I’m an excellent listener and I briefly considered becoming a therapist.  But who wants to listen to people’s problems all day and do nothing about them?

After graduating, I applied for a position at the School of Public Health at the University of Medicine and Dentistry of New Jersey (UMDNJ), now part of Rutgers University.  I never knew the position was intended for students, but the hiring manager was so impressed with me that he referred me to a colleague on UMDNJ’s Newark campus that could use my help.  So I went up there and met with the Department Head and my potential supervisor at the School of Health-Related Professions.  They were a little concerned about my inexperience, but took me on as a temp.

In a few months, I did well enough that they offered me a permanent role, including a big salary boost.  Yes!  After some time, I was itching to start taking classes again, so I enrolled myself in a Master’s degree program at New Jersey Institute of Technology (NJIT).  Through my classes there, I met a fellow student working as a Software Engineer, my dream career at the time.  He referred me through his company’s HR department, and in January of 2011 I started at Nuance Communications as a Software Engineer.

I worked at Nuance for 4 years before I missed working in education.  It took working outside education to realize that my true calling was in education.  So I applied for an Instructional Designer role at Rutgers University, and I started working there in January 2015.  A few months later, in May 2015, I graduated with my Master’s of Science degree in Computer Science from the New Jersey Institute of Technology (NJIT).  A few months later, in November 2015, I was promoted to Senior Instructional Designer, my current role.

My philosophy is to improve educational outcomes using any means at my disposal.  In my case, that means using my technical experience to bring lessons to life, and make the learning experience more interactive.  I started this blog as a way to archive and comment on all the education-related articles and technologies I run into on a daily basis.